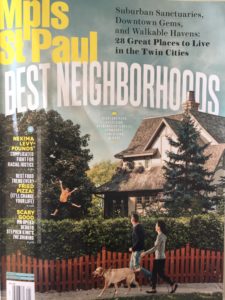 Kudos and (Just a Few) Quibbles

Kudos to Mpls. St. Paul Magazine for its well-done May, 2016 cover story, “Suburban Sanctuaries, Downtown Gems, and Walkable Havens:  28 Great Places to Live in the Twin Cities” (“on newsstands now,” as they say).

If you’re new to town, you’ll want to check out the article for its thumbnail sketches of over two dozen Twin Cities neighborhoods.

If you’re not, you’ll still be curious to see what the authors say about your neighborhood, and whether they got it right.

For the most part, yes.

I’ve long known about the gorgeous Tudors in the area.

What I didn’t know is that the builder of many of those, Thorpe Brothers, also developed homes in Edina’s Country Club neighborhood.

The article also nails one of the biggest trends evident in the Twin Cities housing market:  the rise of what I’ll call “spillover” neighborhoods, that have spiked in popularity as “Perennial Favorites” like Linden Hills and Morningside have become increasingly pricey and picked over.

To name a few examples NOT mentioned in the article:  St. Louis Park’s Birchwood and Sorenson neighborhoods, benefiting from appreciating Fern Hill to the east; Minikahda Vista, being driven up by adjacent Linden Hills; and Kenny and Armitage in Southwest Minneapolis, south of Fulton and Lynnhurst (I’ll let my Realtor colleagues across the River come up with the east Metro equivalents 🙂 ).

Finally, I agree with the authors that the “Union Park” neighborhood in St. Paul is a dud.

Never heard of it?

My point exactly (for the curious, it includes Merriam Park, Snelling-Hamline, and several other, quite different subdivisions).

Quibbles:  Suburbs Have Neighborhoods, Too

One.  The 28 “Great Places” lumps together entire suburbs like Edina and St. Louis Park with bona fide, far smaller neighborhoods like Kingfield and Bryn Mawr in Minneapolis, and St. Anthony Park in St. Paul.

However, for a handful (Edina, St. Paul’s Lowertown), price appreciation is since 2011.

Three.  While Linden Hills and Fulton by Lake Harriet have never been more popular (or expensive), I still wouldn’t characterize Country Club and Morningside in Edina as “appealing to young families who can’t afford some of the tonier parts of Southwest Minneapolis.”

If anything, the substitution effect runs the other way, as new construction in high-demand East Edina pushes $2 million (the article is right about oppressive Minneapolis property taxes, though).

Like much of the housing market, opinions and preferences are often subjective.

Readers will no doubt have their own favorites, but the Magazine’s neighborhood profiles provide a nice starting point.

Also: “How to Recognize a (Too) Trendy Neighborhood”; “Downtown Minneapolis:  How Many Submarkets?”; and “Hmm . . . I Wonder Where Minneapolis’ “FiDo” Neighborhood Is.”