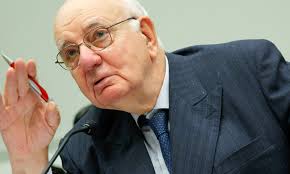 [Editor’s Note:  The post below originally ran more than a decade ago, in the aftermath of the 2008 Crash (Oct. 20, 2009 to be exact). My sentiments about former Federal Reserve Chairman Paul Volcker, who died yesterday at age 92, are exactly the same today.]

I don’t have many heroes, political or otherwise.

But Paul Volcker’s on it.

His leadership as Fed Reserve Chairman in the early ’80’s was perhaps the crucial piece in subduing inflation ” which threatened to spiral out of control at the time ” and thereby helped set the stage for an unprecedented 20 year-plus period of prosperity.

Now, he is on record recommending that too-big-to-fail financial institutions be broken up; that commercial banks, whose deposits are federally insured, not be allowed to use that money to make risky financial bets; and that credit derivatives be strictly regulated (and in many cases, banned).

Hard to argue with any of that.

But none of these proposals are going anywhere, because Volcker and others like him no longer have any power.

We are all poorer, in many ways, for that.

P.S.: Near the end of the Reagan administration, when Iran-Contra and other scandals were undermining Presidential authority, a satirical bumper sticker came out saying, “None of this would be happening if Reagan were still alive.” Today, substitute “Volcker” for “Reagan.”

See also, “From “Tall Paul” to “Tiny Tim”: Parsing the Puzzle(s) of Tim Geithner, 5+ Years After “The Crash”; “Paul Volcker: “No Substitute for Structural Change’“; “The Ultimate Status Symbol? Your Own “Rule”; “My Candidate for President“; and “Reform Shorthand: Where’s Volcker Standing?“