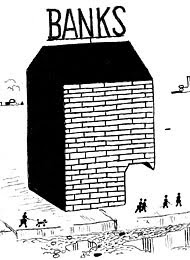 Imagine being able to consult Albert Einstein about a physics conundrum, or FDR or Lincoln about an existential national emergency (like the one we’re facing now, perhaps).

Having Paul Volcker, the 82 year-old former Fed Chairman, still on the scene and available to advise and guide is truly a stroke of good luck.

So what is he prescribing?

Basically, the same thing he’s been saying for over two years, only now with a little more traction:

I am well aware that there are interested parties that long to return to “business as usual,” even while retaining the comfort of remaining within the confines of the official safety net. They will argue that they themselves and intelligent regulators and supervisors, armed with recent experience, can maintain the needed surveillance, foresee the dangers and manage the risks.

In contrast, I tell you that is no substitute for structural change, the point the president himself has set out so strongly.

I’ve been there ” as regulator, as central banker, as commercial bank official and director ” for almost 60 years. I have observed how memories dim. Individuals change. Institutional and political pressures to “lay off” tough regulation will remain ” most notably in the fair weather that inevitably precedes the storm.

The implication is clear. We need to face up to needed structural changes, and place them into law. To do less will simply mean ultimate failure ” failure to accept responsibility for learning from the lessons of the past and anticipating the needs of the future.

Let’s see . . . as a nation, we can heed the distilled wisdom of one of the country’s wisest, most successful financial stewards and public servants . . . ever.

Or, we can do what Wall Street wants (basically, nothing — but keep the government backstops and free money flowing, thanks very much).

Not much of a choice.

P.S.: If you read the entirety of Volcker’s piece, you’ll note that he demurs — because of space limitations — on a number of thorny issues, including revamping how U.S. home purchases are financed:

We also face a large challenge in rebuilding an efficient, competitive private mortgage market, an area in which commercial bank participation is needed. Those are matters for another day.

Let me translate the above: ‘Fannie Mae and Freddie Mac are toast. Time to start over’ (as even Barney Frank now admits).