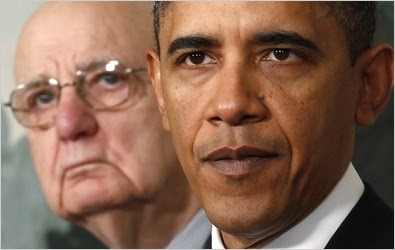 President Barack Obama proposed new limits on the size and activities of the nation’s largest banks, pushing a more muscular approach toward regulation that yanked down bank stocks and raised the stakes in his campaign to show he’s tough on Wall Street.

So, government’s iron fist is once again coming down (too) hard on private enterprise, imposing (more) bureaucratic red tape on businesses, and hurting job growth and the stock market.

If the Journal had asked me to re-write the lead, here’s what I would have said instead:

President Obama belatedly announced the first, limited steps to address the root causes of today’s economic melt-down: reckless Wall Street banks that have required trillions in taxpayer bailouts to deal with the consequences of their highly leveraged, bad bets — bets that have caused millions of Americans to lose their jobs, savings and homes.

With the market now down a couple hundred points in the wake of the newly announced bank “reforms,” it will be interesting to see if Obama sticks to his guns.

P.S.: want a short-hand way to tell? Figure out how close (or far) Paul Volcker is standing from him (yesterday, he was standing at his side).