“Learn More About Your Followers” = Spend Ad Dollars on Twitter

To figure out how much Twitter is worth, you need to know how many “Twitterers” (“Tweeters?” “Twits?”) will bite on the company’s email invitation to learn “more about their followers” and “what resonates with their followers to drive better engagements” (whatever that means — both phrases are excerpts from the company’s email campaign to potential advertisers . . . like me).

In other words, to value Twitter, you need to project how many ads it can sell (as Facebook apparently is now doing in spades). 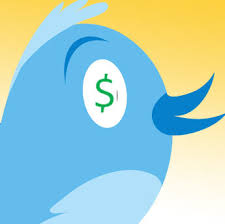 For a business with no bricks, mortar, or — effectively — gross margins.

Translation:  once you pay the software guys (and the occasional gal) . . . it’s pure profit.

Step #2:  assign a price-earnings ratio to that $1.5 billion that accurately factors in Twitter’s expected growth and market risk(s) — the $64 billion question, as they say.

I’d put a premium on the company’s earnings, because of its growth potential, but not a huge one, because of the faddishness of technology and consumer preferences generally.

If the overall market P/E is in the high teens now, that translates into a 20 – 25 P/E for Twitter.

That compares with Twitter’s current market cap of $33 billion.