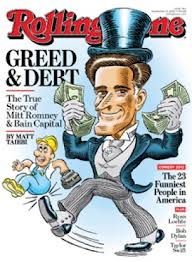 Successor to Thomas Wolfe’s “Master of the Universe”

Once upon a time, human beings were lowly Neanderthals.

Gradually, Neanderthals evolved into Cro-Magnons, and from there into Homo Sapiens.

What is mankind’s next (d)evolutionary step?

According to muckraking journalist (and amateur anthropologist) Matt Taibbi, it is “Archipelago Man,” as personified by none other than Mitt Romney.

As defined by Taibbi, an “Archipelago Man” is:

“. . . a person to whom nations are meaningless, who lives in a stateless global archipelago of privilege — a collection of private schools, tax havens and gated residential communities with little or no connection to the outside world.”

According to Taibbi, Archipelago Man is characterized by his financial m.o. (modus operandi), which consists of “manufacturing transactions instead of products, generating wealth without accompanying prosperity, and lovingly erecting and nurturing Cayman Islands partnerships while American communities fall apart. The entire purpose . . . is to move money into the archipelago from the places outside it, using massive amounts of taxpayer-subsidized debt to enrich a handful of billionaires. It’s a vision of society that’s crazy, vicious and almost unbelievably selfish, yet it’s running for president, and it has a chance of winning.

Interestingly, Minnesotans witnessed an immediate predecessor of “Archipelago Man” almost exactly two decades ago, in the person of Al Checchi.

After acquiring hometown company Northwest Airlines with billions in debt, Checchi rather infamously succeeded in “procuring” another $700 million from state taxpayers in exchange for promising to :  a) create 1,000 jobs on the Iron Range; and b) not to relocate the company (more of a bluff than a threat, given the airline’s dire finances).

Checchi’s prior experience in the airline industry:  zero.

Actual number of Iron Range jobs created:  around 50, depending on who’s counting (that would be something like $14 million per).

More than $80 million of what Checchi  extracted from Northwest Airlines and Minnesota subsequently ended up being squandered on his unsuccessful race for California governor in 1998 (exactly four years before Mitt Romney ran for Massachusetts Governor and won).

Just imagine if Checchi, not Gray Davis, had been elected back then . . .

P.S.:  “Masters of the Universe” was the term coined by Thomas Wolfe in his stellar, 1987 Wall Street-themed novel, “Bonfire of the Vanities.”