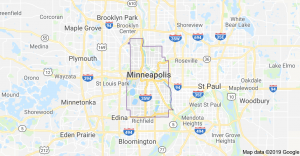 A River Runs Through It (Diagonally)

Test your knowledge of Minneapolis’ quirky geography (or at least, quirky neighborhood names), and see if you know which of the following are real terms, used by the locals . . . and which aren’t:

A. “North Minneapolis.” Yup, there is such an area: it’s the collection of 13 city neighborhoods that run from Harrison, almost directly west of Downtown, to Shingle Creek, in the city’s far northwest corner.

Which begs the question, “why isn’t it called “Northwest Minneapolis??”

Roughly speaking, it’s all the area that’s south of Downtown.

However, given that Downtown is located well north of the city’s midpoint, “South Minneapolis” arguably constitutes more than two-thirds of the city.

While the city does have an east side (mostly neighboring St. Paul) . . . it’s not called that.

Instead, it’s referred to as “Longfellow,” which in turn consists of the Seward, Longfellow, Cooper, Howe, and 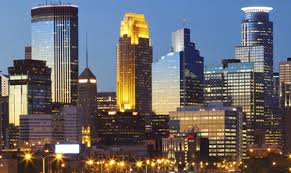 Hiawatha neighborhoods (no, you’re not imagining: “Longfellow” is both a neighborhood and a broader area within the city).

At least the eastern boundary of Longfellow is easy to keep straight (I mean, “diagonal”): the Mississippi River.

Its other boundaries are Interstate 94 (north); Hiawatha Ave or Highway 55 (west); and Minnehaha Falls (south).

It’s located north of downtown, and bounded on the west by the Mississippi River.

But, if you look at a city map, it’s actually located in the northern part of the city; geographically, the real “Northeast Minneapolis” is called . . .

G. “Southeast Minneapolis.” Home to the University of Minnesota’s main campus including an area called the “West Bank” (of course), “Southeast” is located across the Mississippi ” and directly east of ” downtown Minneapolis.

Puzzlingly, however, the only thing it’s southeast of . . . is “Northeast Minneapolis.”

Locals define it as the neighborhoods near Cedar Lake, Lake of the Isles, Lake Calhoun, and Lake Harriet.

Geographically, “Southwest” has the virtue of being the one part of Minneapolis that is located exactly where you think it should be.

With all those gorgeous lakes, it is also home to the city’s (and some of the state’s) most expensive housing.

**That would be my now 15-year-old daughter, who gets her driver’s license (hopefully) in the Fall.