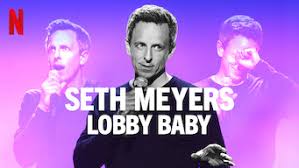 But Meyers’ dig on Minneapolis’ not-so-identical older twin across the river, St. Paul, is still timely:

“With twins, it’s very important to pay attention to each of them equally, or else one of them gets a complex. In real life, if you had twins, it would be the wrong move to give them such different names: “This is Minneapolis, which is the Dakota word for ‘water’ and the Greek word for “city.”  And this is . . . ‘Paul.'”

Even if you don’t live in the Twin Cities, you’ll enjoy Meyers’ take on parenthood, marriage, and (of course) Trump.

P.S.: Does the timing of Meyers’ special mean that Pete Davidson — who’s in Minneapolis now doing a series of shows — has a stand-up special coming out next Spring??