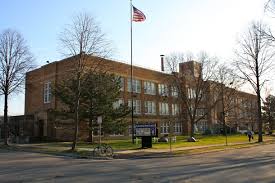 Is there an equivalent discount for homes located across from a school? (which, in a way, is really just a subset of the “busy street” discount).

I’ve never seen data on this, but I’d guess “yes.”

I’d further speculate that the discount varies depending on the following three factors:

Two. Upper or lower school.  In Minnesota, at least some 16 year olds start to drive, smoke, litter, and generally call more attention to themselves.  You’d guess that being next to a teenager-filled high school would be more disruptive than being next to an elementary school ” and therefore warrant a bigger discount.

The lower campus of the Blake School in Hopkins is straight out of a postcard:  set on a picturesque hill several hundred yards removed from the street.

I doubt very much its neighbors mind that view.

By contrast, I can imagine that a graffiti-covered school, at eye level, steps from the street would require more of a discount.

As with anything in real estate, the identity of the Buyer and their subjective preferences matter.

In that vein, there’s at least one scenario where being across from a school would likely command a premium:  a big family with lots of school-age kids.

See also, “Explaining High Turnover on a Busy Street“; “Marketing a Home on a Busy Street”; “You Can’t Change a House’s Location (Can You??)”; and “Garage/Driveway Switcheroo.”