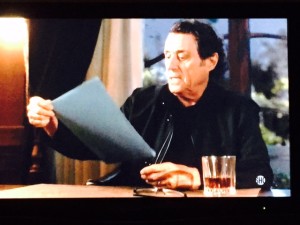 Playing Defense as Well as Offense

Anthony Finney: So I had a contract drawn up to buy you and your company lock, stock, and barrel.
Ray Donovan:  I’m not for sale [walks away].
Anthony Finney:  Ahh . . we’re still negotiating.

After all, when you’re holding four aces, who needs negotiating skill??

The Art of the Timeout

Which is what I liked about the scene in “Ray Donovan” where business potentate Anthony Finney, played by Ian McShane, essentially rejects Ray Donovan’s rejection by characterizing it as a negotiating ploy.

Which is itself a negotiating ploy.

Sometimes, when you’re the underdog, a tie is a win, and when you’re about to be routed, the smartest thing you can do . . . is to call a timeout.

In one, Harvard overcame a 16 point deficit against Yale in the game’s final 42 seconds to secure a tie.

Conversely, the most famous “tie-loss” would be Notre Dame’s decision, in its last possession late in the game, to run out the clock (and avoid a turnover) rather than try to defeat Michigan State.

Critics instantly labeled the strategy, “Tie One For the Gipper.”

Plus these: “Negotiating Tips”; “How to Become a Good Negotiator“; “The Key to Successful Negotiation“; and ““Splitting the Difference’ and Other Negotiation Tactics.”