Contrary to popular perception, the most common explanation for skydiving fatalities isn’t due to a parachute failing to open. 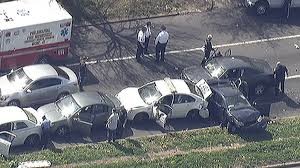 Rather, the first parachute opens partially.

Then, instead of cutting the first chute loose and pulling the reserve, the (understandably) panicked skydiver immediately opens the backup — which runs into the fouled, trailing first chute, rendering both useless (grim but true).

Even in a seller’s housing market with scarce inventory, it’s still possible to pinpoint multiple Twin Cities neighborhoods this Spring with supply overhangs.

The most common scenario:  one or more homes listed last Fall or even Summer at too-high prices; fizzled (failed to sell); and are now clogging the sales pipeline for newer listings.

The phenomenon is more common at higher price points (over $500k), where homes typically take longer to sell anyways.

Whatever the explanation, the short-term solution is invariably the same:  lower asking prices.

The longer term solution is for one or more of the languishing listings to cancel, and wait for the overhang to clear.

Meanwhile, savvy Buyers (and their agents) know to be on the lookout for just such situations . . .