An Acronym That Captures the Zeitgeist

OK, so the term is easily confused — at least by someone with dyslexia — for another, not-so-nice acronym (“MOFO” — look it up).

And the new app designed to exploit “FOMO” (Fear of Missing Out) targets insecure, 20-something social climbers (called “CouchCache,” it lets users give others the impression 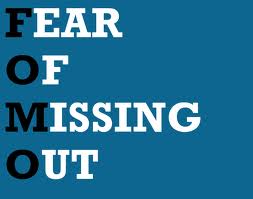 that they’re at the hot new bar/restaurant/private party when they’re really . . . sitting at home on their couch).

But, it undeniably applies to at least some Buyers in today’s housing market.

What exactly are FOMO Buyers afraid of missing out on?

Combine all of the above, and this year’s housing market has the ingredients to be the most, well, interesting since at least 2005.