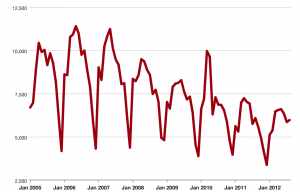 Detect any patterns in the chart above?

Here’s what I see:

–Since the housing market top around 2006, both the new listing peaks and troughs have been successively lower, with one notable exception:  2010, when tax incentives for new buyers created a huge spike in listings;

The Twin Cities housing market exhibits a strong, predictable seasonality, albeit one that can be distorted by temporary stimuli/incentives.

Oh! . . . and there are A LOT fewer homes for sale locally these day (hardly news to Realtors and folks in the market now).

P.S.:  Given that low inventory, this Fall may very well be an exception, but (Realtor) conventional wisdom is that Twin Cities home buyers have fewer choices but get better deals after Labor Day.