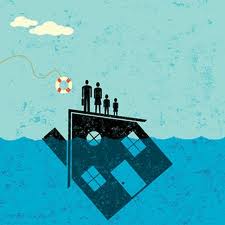 That’s the question I fielded the other week from a client on behalf of their friend, who was leaving town imminently, and was (deeply) underwater on their North Minneapolis home.

The more detailed answer:  “no, for about 18 different reasons,” starting with the fact that what the underwater homeowner is essentially “donating” is a debt — the difference between his home’s fair market value and the outstanding mortgage on it.

As you might imagine, creditors frown on debtors shedding their obligations in such a fashion (one might even say “snake-like” — see below).

To prevent that, mortgages invariably include what’s called “acceleration clauses.”

“You Can Move, But You Can’t Hide”

In plain English, acceleration clauses provide that if the owner transfers (“alienates”) title to their home, the entire mortgage balance becomes currently due and payable (“accelerates”).

So, not only does the underwater homeowner not escape the debt — they have to pay off the full balance immediately or face foreclosure.

Even if mortgage debt was assignable, what putatively rational person (or entity) would voluntarily assume it?

All of which got me thinking:  isn’t there a precedent for a person — or at least a “corporate” person, as the Supreme Court

defines it — who’s hopelessly underwater on their debt(s) turning to a non-profit for relief and receiving it?

Indeed, for that individual/entity leaving said non-profit very much holding the bag, not on a puny $25,000 or $50,000 in bad debt, but hundreds of billions (if not trillions)?

In fact, there is.

The entities are called “Wall Street investment banks,” and the institution that relieved them of their underwater financial dreck was a certain non-profit called “the U.S. Government,” operating through the auspices of the U.S. Department of Treasury and The Federal Reserve and an unholy amalgamation of ad hoc, stinks-to-high-heaven policy initiatives such as TARP, ZIRP, loan guaranties, direct purchases, and the like.

In other words, you and I bought Wall Street’s crap.