Count me amongst the Twin Citians that had no idea that the next leg of  the Twin Cities’ light rail system — the Central Corridor along University Ave. — was so far along.

Traveling in the area this morning, 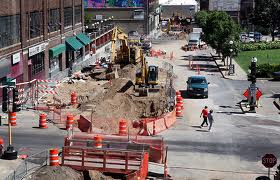 I had expected to see a couple blocks under construction, with the attendant traffic snafus.

Instead, I encountered a miles-long stretch of construction on University running all the way from Highway 280 on the west, to Lexington on the east.

As a big fan of light-rail, I think it’s great that the project is advancing so fast (and I’m happy to report that behind most of the orange traffic cones and barriers were actual, busy construction workers).

But it was hard not to notice that the retail businesses on the south side of University were virtual no-man’s lands.

I had assumed that the line was going to be built out incrementally, to minimize the hit to local businesses.

My assumption is that tearing up all the streets at once serves some financial and/or construction imperative.

If instead it’s about creating jobs in a recession, it would only seem fair to balance the interests of University Ave. businesses against those of the construction workers.