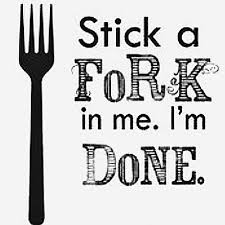 For an unassuming four letter word, “done” sure has a lot of different connotations.

I count at least eight (below), including two meanings — one good, one bad — popular in residential real estate.

One. To perfection. Example: “That house is done. It’s not staged like a spec house.” See, “done to the nines.”

Two. Dated, out-of-fashion; over. Sometimes preceded with a “so” for emphasis. “Earth tones/granite counters/stainless steel are [so] done” (actually, they aren’t).

Three. Completed a chore or task. “Are you done with your homework?”; “the laundry’s done,” etc.

Six. Exhausted one’s patience — usually a parent’s — following which the activity in question is abruptly ended. Most common formulations, uttered with exasperated disgust: “We’re [done]”; “You’re [done].” What a parent says to a misbehaving child at the playground, restaurant (remember those?), etc.

Seven. Finished speaking your peace, sometimes followed with a “yet.” One spouse to another in an argument: “Are you done [yet]??”

See also, “Your Money’s No Good”; “Re-Duded Home“; and “Congratulations!  You’ve Been Pre-Selected!”