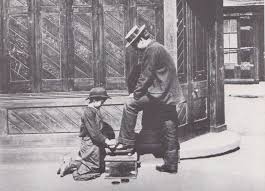 [Note to Readers: in the wake of GameStop’s Reddit-fueled roller coaster ride, the post below is getting renewed attention. To would-be market timers, though, here’s a heads up: the post appeared almost 5 years ago, when the Nasdaq — which contains many high-flying tech stocks — closed at 4,476. Its close today: 13,256, almost triple.]

Just before the 1929 crash, Joseph Kennedy (father of President John F.) was supposed to have dumped all his stocks because a Wall Street shoeshine boy started giving him stock tips.

Kennedy reasoned that, if even shoeshine boys were playing the market, there was no remaining, untapped demand to support stock prices . . . and it was (high) time to get out.

In truth, Kennedy was a consummate insider who knew full well how frothy the market had become — in large part due to manipulations by insiders such as himself** — and sold to avoid the inevitable carnage.

If that’s so, which way does sentiment cut today?

Almost a century after Kennedy’s time, there are no more shoeshine boys.

Instead, the modern equivalent would likely be service workers like restaurant wait staff, hair stylists, and Uber drivers.

At least anecdotally, my sense is that those folks all “know” that stocks are risky, and to stay away.

**As the first Chairman of the Securities and Exchange Commission (“SEC”), appointed by FDR, Kennedy acted to outlaw many of the practices (front running, manipulating trading volume, etc.) that contributed to The 1929 Crash.