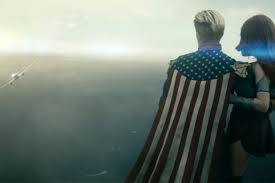 [Spoiler alert: this post divulges a sub-plot from Season One, Episode #4, “The Female of the Species.” Stop here if you don’t want to know.]

As super powers go, you’d think safely landing a stricken passenger jet would be a cinch.

Especially when the Superhero (“Supe”) in question — Homelander in Amazon Prime’s “The Boys” — can fly at the speed of sound, shoot lethal laser beams from his eyes, and hurl 8-ton trucks as if they were toys.

Queen Maeve: “You’ve got to go out there — lift the plane up!”
Homelander (incredulous): “Lift the plane up?!? How? There’s nothing to stand on. It’s f*cking air!”
Queen Maeve: “I don’t know, fly at it, ram it straight.”
Homelander: “No, [at] that kind of speed, either the plane goes ass over tit, or I’ll punch straight through the hull, or . . . ”

So, why not at least save as many passengers as he can from the doomed jet before it crashes? (he can fly, after all).

Because Homelander’s recklessness helped disable the plane — he “lasered” (destroyed) the cockpit controls by accident — and any surviving passengers might be witnesses.

A distraught Queen Maeve needs convincing, but Homelander finally prevails on her to join him in abandoning the plane and everyone aboard, even as Homelander reassures the frantic, pleading passengers otherwise.**

The scene ends with both of them watching the doomed plane plunge to to the ground, as they levitate in the sky behind it (photo, top).

P.S.: For sheer villainy, that all-too-indelible last image ranks with the elevator scene in “Fargo”; Keyser Soze’s response when a kidnapper holds his family hostage in “The Usual Suspects”; and anything conceived by “Breaking Bad’s” Vince Gilligan.

**In various talk shows discussing “The Boys,” the actor who plays Homelander, Antony Starr, juxtaposes the emotional strain Maggie Shaw (“Queen Maeve”) experienced playing the scene, vs. the ease he felt depicting a guilt-free (if not gleeful) psychopath.