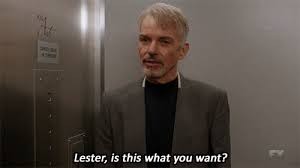 The Most Chilling Crime Scene Since “The Usual Suspects”

Such is the chilling exchange/showdown between “heavy” Lorne Malvo and once-upon-a-time good guy(?) and former milquetoast Lester Nygaard in the (casserole) crime noir TV series “Fargo.”

The setting:  inside a Las Vegas hotel elevator, in a scene that’s an instant classic — and eerily reminiscent of an equally memorable scene in crime thriller “The Usual Suspects,” more than 20 years ago.

That movie, of course, introduced the world to “Keyser Soze,” the last character as malevolent as Lorne Malvo, played by Billy Bob Thornton.

Far be it from me to ruin this (or dozens of other memorable) moments in the terrific FX series.*

Suffice to say, for erstwhile fans of “Breaking Bad” who despaired of ever getting another fix:

P.S.:  Or already was.  The 10 episode series originally ran last April – June, but I just caught up to it online.

Notwithstanding the linkage to “The Usual Suspects” and the Coen brothers’ involvement as producers, “Fargo’s” true provenance is “Breaking Bad.” 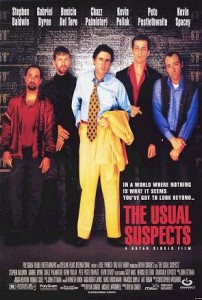 The scene ranks up there (really!) with the classic Jimmy Stewart – Donna Reed phone call near the beginning of “It’s a Wonderful Life.”

See also, “The Most Famous Home in America (at least tonight).“