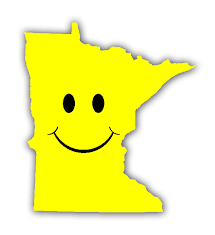 Reticent Scandinavians Loathe to Give Offense

Thanks to Senator Amy Klobuchar’s recently announced Presidential campaign — and by now, her very well-documented “bad boss” rep — the national media is having a field day with “Minnesota Nice.”

Unfortunately, they’re getting it completely, even spectacularly, wrong.

“‘Minnesota Nice’ is a form of radical politeness combined with an unshakeable and largely unexamined sense of obligation to one another.”

Nope, not even close.

Flanagan first misdefines the term, then compounds her error by conflating “Minnesota Nice” with another, completely different phenomenon: the palpable sense of a social fabric here (vs. say, Manhattan).

Flanagan is correct that Minnesotans generally look out for one another, and are viscerally bothered by social and income inequality.

But, as locals know, the essence of “Minnesota Nice” is a superficial nicety masking a deeper insincerity if not chilliness (some even call it “passive-aggressive”).

Very likely the natives’ disproportionately Scandinavian heritage**, and their cultural aversion to confrontation or giving offense of any kind, however slight (again, something not associated with people from New York City or Philadelphia).

So, instead of lustily telling someone who cuts in front of them in line to “Go #$% themselves!!,” Minnesotans are more likely to silently shoot daggers at them with their eyes.

“Minnesota Nice” is also my wife, years ago, striking up a nice conversation on the playground with another Mom, who suggested that they and their toddlers get together for a play date.

However, when my wife left several messages to follow up . . . “playground Mom” never responded.

(Note: fans of New Yorker cartoons will recall the illustration of two busy New Yorkers halfheartedly planning a get-together. The caption: “How about never? Is never good for you??”).

Of course, the flip side of “Minnesota Nice” is an almost preternatural forbearance.

When my then learning-to-drive wife stopped her car in a grocery store parking lot to check something in the owner’s manual . . . it took her at least 20-30 seconds to realize there was a line of (non-honking) cars accumulating behind her (I’m not sure that that would happen today).

**The joke about Minneapolis’ long-serving former Congressman, Martin Olav Sabo (the “Olav” got added during election years), was that he once got so upset about an issue that he almost spoke up about it.