OK, so this post just might have something to do with having three teenagers under my roof. 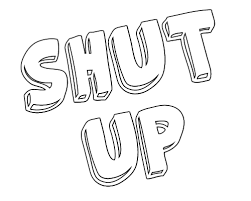 But, as they say, “write what you know.”

In that vein, no one is more familiar than me with all the nuances and shadings of that timeless phrase, “Shut up.”

Five. “Stop lying to me.”  What wife says to cheating husband (or husband to cheating wife).