About a zillion years ago at The Punchline nightclub in San Francisco, I heard a hilarious bit by (a then unknown) Rob Schneider recounting the various usages of the word “Dude.” 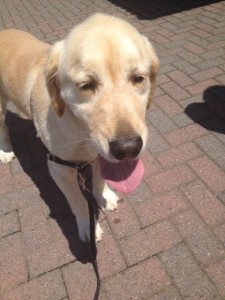 And so on (I think Schneider topped out at 12 meanings).

In the same vein (sort of), I count at least seven definitions of “hot dog” (the first two feature pictures of my own Golden Retriever, above and below):

One.  An overheated, panting canine — like mine at the end of a walk around Lake Calhoun on a particularly humid day.

Two.  Popular dog.  The same canine, refreshed and revived barely five minutes later, surrounded by his new best friends (strangers who asked if they could pet him).

Close relative: the overweight, middle-aged guy who wears a thong bikini at the beach.

Four.  A show-off — usually a young male athlete on skis, a skateboard, or a motorcycle.

Five.  Expression of delight or enthusiastic approval, as in “How about that!?!”

I’m sure there are even more slang versions, but I’ll stop there . . .