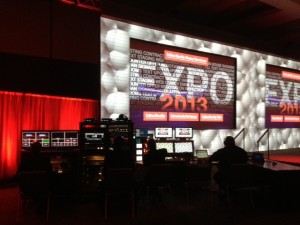 “I’ll Be Done in Just Another Minute”

In her remarks, Vanden Boom shared her proposed image for a Realtor statue:  a Realtor on the phone, pleading for just another minute to finish up.

Hey, baseball and football have Cooperstown and Canton, respectively; why shouldn’t there be a Realtor Hall of Fame, with said statue in front??

Other highlights from the day-long gathering, titled “Expo 2013”:

â€¢For the first time in seven years, housing will go from being a drag on the economy to being a bright spot.  So says Edina Realty (and Home Services of America) top dog Ron Peltier.

â€¢Edina Realty’s ad and marketing campaign will now be multi-year, not updated annually.  The new tag line:  ‘The Edge You Need.’

To underscore that point, all the technological “plumbing” that is usually hidden behind the curtain at the Annual Expo was in plain view, in front (photo, top).

Ditto for all the audio stage direction that the audience usually doesn’t hear.

â€¢New home construction.  Per Mr. Peltier, new homes sales will continue to rebound, albeit slowly, from generational lows (construction dropped to something like 300,000 units annually at the bottom in 2010, from a peak of well over a 1 million units five years earlier).

The slow pace is due not just to the fragile economy, but the fact that the industry now has much less capacity, due to all the builders who left the market during the downturn.

Personally, I like the change:  waiters serve their customers, good Realtors take care of them.

â€¢“Kitchen Bingo”:   one of the new app’s being rolled out early this year lets prospective Buyers not just compare individual properties online, but literally juxtapose specific rooms, like the Kitchen.

The effect of seeing five different homes’ Kitchens side by side was dubbed “Kitchen bingo.”

No wonder smart phone screens are getting bigger!  (yet another trend:  everything is migrating from the PC and desktop to mobile).

â€¢“Prehab” vs. “rehab”:  keynote speaker (and former Disney exec) Lee Cockerell made the point that if you do “prehab” — live a balanced life with the right priorities — you’ll lessen the odds of needing to do “rehab” later.

All of the above was just from the morning session; I had to bolt at lunch to catch up to a few deals!

*At least to me, a Realtor statue is an oxymoron; my notion of a Realtor is someone who never stops moving (some would say “talking”)  . . . 🙂