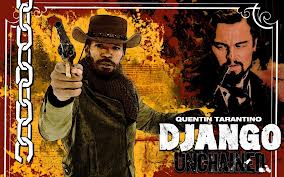 As much as I’ve enjoyed other Quentin Tarantino films — “Pulp Fiction” immediately springs to mind — it’s hard to relax, let alone enjoy watching a film when you don’t know which man, woman, child, or horse(!) is going to get its head blown off next.

Yes, horses:  there are so many equine “splatter shots” in “Django Unchained” that the credits immediately following the closing scene promise that “no horses were harmed making the movie” (good for a laugh from the audience I saw it with).

There’s also skulls-smashed-in-by-hammers; a slave torn apart by dogs; a (very) near castration; graphic whippings; and lots of corpses (and not-quite-corpses) used as human shields in close-quarter gunfights, with predictably sickening results.

I know critics are calling this Tarantino’s homage to spaghetti Westerns (amongst other things), but for me, the film recalled a different (and more gory) kind of spaghetti and meat sauce.