3 Very Big Holes in the Ground — For Now

Yes, the real estate recovery is supposed to be gradual and halting, not roaring.

But, tell that to developers active in Minneapolis’ Uptown neighborhood. 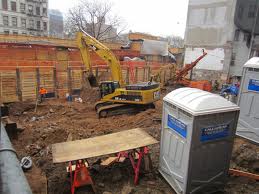 At the moment, I count not one but three major projects, all poised to lift off (up?) between now and Spring:

One.  Girard between Lagoon and Lake St.

Two.  Bryant between 29th and Lagoon.

Three.  Minneapolis Walker Library site on the northwest corner of Hennepin and Lagoon.

I don’t have specifics on any of these projects, but here’s a (very) educated guess:  they’re all mixed use (residential, retail, commercial/office), with the residential component consisting of luxury rental.

Oh! — and they’re all big:  anywhere from one half to an entire city block in size.

P.S.:  In contrast to the above, the site on the north end of Lake Calhoun, where Michael Lander’s proposed development foundered several years ago, appears to be very much idle.

The neighbors who all squawked about increased density, obstructed views (the development was only going to be five stories high), etc. instead get to look daily at a site full of ungainly industrial storage (sewer pipes and various plumbing supplies).