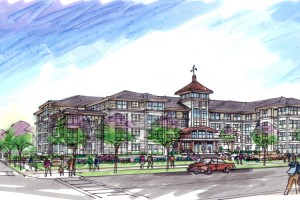 When the economy comes back, where will Twin Cities developers pick up?  Most likely, where they left off when the recession and downturn arrived.

In a post earlier this month titled, “Halftime at the Housing Recovery,” I posited that one sign that the housing market has fully recovered is that the percentage of lender-mediated sales (foreclosures and short sales) returns to pre-Crash levels (5% or less).

A close second:  the acre-plus parcel between Beard and Chowen on 50th Street in Minneapolis’ Fulton neighborhood.

Formerly billed as “The Bancroft,” the project has been reconceived as a senior rental facility now called “The Waters” (pictured above).

According to the developer’s Web site, the project is opening next Summer (here’s hoping the “waters” it’s referring to isn’t Lake Harriet — almost a mile to the northeast).

For example, it seems (at least to me) that there’s a growing niche for “pre-senior housing” (more cultural amenities, less medical services).