Pawlenty’s exit from the public stage should be applauded, [former Pawlenthy aide Brian] McClung said.  “It’s what the founders had in mind when our system was created,” he said.  “Pundits and the chattering class often seem confounded when someone chooses to do what Governor Pawlenty is doing, but it’s a good and healthy thing.”

Once upon a time, “returning to the private sector” meant that an exiting politician was returning to their family business or country estate (think, Washington and 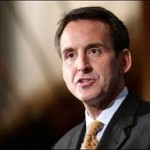 Mount Vernon, or Jefferson and Monticello).

More recently, it meant that the retiring politician was (re)joining their law practice, or returning to run a large corporation.

“Returning to the private sector” invariably means jumping from government to a trade group whose job is  . . . lobbying government.

How exactly is that anyone’s definition of “returning to the private sector?”

Question #2:  How can a job lobbying on behalf of the financial services industry pay almost $2 million a year?  (Pawlenty’s predecessor at the Financial Services Roundtable reportedly received $1.8 million annually).

Answer:  because having a say in how untold government spoils are divvied up is worth billions or even trillions — not to mention influencing how much (or little) regulation Wall Street is subject to.

Former Treasury Secretary (and Republican stalwart) George Schultz famously said that if a corporation is too big to fail, the solution is “to make it smaller.”

If lobbying modern government on behalf of Wall Street is that lucrative — and all indications are that it is — the obvious solution is to shrink the size of the “financial-industrial complex” those lobbyists serve.

See also, “The Scorpion and the Tortoise Defense.”