A tight supply of homes and an increase in affordability fueled by record-low mortgage rates are helping shore up some regional markets where values plunged during the recession. San Francisco’s home prices surged at a 16 percent annual rate in the three months ended in April, while Phoenix gained at a 26 percent rate, according to Case-Shiller. 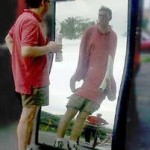 rates in San Francisco and Phoenix at the moment?

So, where did Bloomberg get its statistics?

By multiplying the most recent quarterly increases for San Francisco (4%) and Phoenix (6.5%) by four.

Using the same logic, you could say that the stock market — up 2% in the last 3 trading sessions — is “appreciating at a torrid 160% annual rate” at the moment.