The Green Bay Packers never lost a game.  They just ran out of time.

If you missed my tÃªte-Ã -tÃªte last week with Barry Ritholtz (“Why the Housing Bears are Bearish“), let me summarize:

Mr. Ritholtz wrote that, even 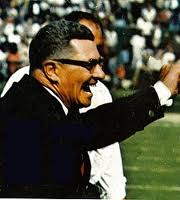 after a 35% drop from the peak nationally, housing has more to fall because — amongst other reasons — deflated bubbles always overshoot.  Always.

I interjected that, actually, that wasn’t true of stocks the last decade-plus.

Mr. Ritholtz then qualified his original observation to say that so far, stocks hadn’t overcorrected.

But that didn’t mean they wouldn’t in the future.

Hard to argue with (or rebut) that.

In fact, my dialogue with Barry almost exactly echoes this excerpt from the “Comments” section of his blog, “The Big Picture.”

“Big Picture” comment:  I don’t recall the S&P careening wildly past (under) fair value after the bubble in 2000.

2) Both Greenspan & Bernanke have artificially propped up equity prices.

The foregoing exchange begs the following observation(s):  might Mr. Bernanke et al have taken any steps to “artificially prop up” housing the last few years? (ZIRP, tsunami-like levels of excess liquidity, currency debasement and its concomitant, elevated inflation, all come to mind).

Steps — I’d hasten to add — which are historically unprecedented, and that play out unpredictably and with notorious time lags.

And if so, why wouldn’t that result in a different outcome for housing prices, just like it has with stocks?

P.S.:  When Mao Tse Tung was asked (in the 1940’s) what had been the consequences of the French Revolution, he reportedly replied, “it’s too soon to tell.”

Of course, connoisseurs of such quotes will recall the most famous of all:  John Maynard Keynes’ “in the long run . . . we’re all dead.”

You could do worse than being quoted in the same breath as Lombardi, Mao Tse Tung, and Keynes.