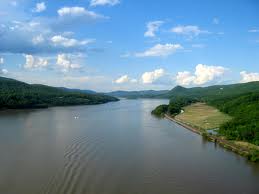 “A River Runs Through It”

Nature, to be controlled, must be obeyed.

You wouldn’t necessarily know it from the sound bite-driven Presidential race, but one of the fundamental questions at stake in the 2012 election is, ‘exactly how free should markets be?’

At one extreme, Libertarians like Ron Paul say “completely.”

They believe that, ultimately, “markets know best,” and should be left to regulate themselves.

At the other extreme, politicians on the far left believe that markets are inherently unstable and dangerous, and therefore the appropriate approach is regulation.

Which is a nice segue to my preferred analogy — namely, a healthy, functioning market is like a river.

Like any force of nature, rivers — especially mighty ones like the Mississippi, Missouri, and Columbia — must be respected and obeyed.

But that doesn’t mean that, at the margins, society can’t — or shouldn’t — act to curb their excesses (e.g., flooding) whenever possible; take necessary steps to ensure river cleanliness and safety; or harness their power — literally — to benefit society.

So, yes, I believe that the Army Corps of Engineers has a role building dams, levees, bridges, etc.

And when private companies dump pollution in a river, they need to be checked (can you say, “Wall Street and securitized mortgages?”).

Ditto when private actors seek to divert rivers for their own purposes, or otherwise appropriate or adulterate what is ultimately a public resource (Wall Street, again).

And finally, co-existing with a force of nature like a river means knowing when the costs to control it are worth it . . . and when they’re not.

So, whenever possible, wise stewards avoid putting people in harm’s way in the first place.

In the real world, that means not (over)relying on levees to protect people in chronic flood plains (or for that matter, building wide swaths of a city below sea level, as in New Orleans).

In the financial world, it means not tolerating too-big-to-fail financial institutions, whose missteps — and misdeeds — threaten to topple the economy.

And it means not allowing Wall Street to create — by a factor of six — more credit derivatives than the cumulative size of the global economy (true).  See, “Number of the Week:  $600 TRILLION.”