One of my favorite political cartoons — from the 1970’s no less — shows a self-satisfied oil executive sitting behind a big desk, his feet up, smoking a cigar (I said it was from the ’70’s).

“You want oil?,” he practically cackles (to no one in particular).

“You want natural gas?,” he continues.

“We own the reserves.”

“You want electricity from coal-fired plants?”

“We own the coal mines.”

Finally, he gets to solar energy.

What’s that got to do with Goldman Sachs? 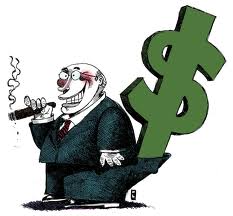 Just this:  when it comes to all things financial, they’re seemingly everywhere . . . and nowhere.

And therefore beyond the reach of millions of aggrieved American consumers, voters, and taxpayers (and protest movements like Occupy Wall Street).

Consider this:  if you want to express your displeasure with too-big-to-fail banks and move your money to a local credit union  . . . you can.

So, you can withdraw your money from Bank of America, JP Morgan Chase, Wells Fargo, etc., but not Goldman Sachs — it doesn’t accept retail deposits (which didn’t stop it from switching its legal status to “bank holding company” at the height of the 2008 financial melt-down).

Want to cut up your Goldman Sachs credit card?

Citigroup, JP Morgan Chase, and other banks issue those — but not Goldman Sachs.

How about home mortgages?

So, what does Goldman do?  (besides unduly influence U.S. financial laws and policy, that is).

Nothing that can be easily explained to laymen.

As best I can tell, it helps huge companies and sovereign (or maybe not) governments (plural) finance their debt; speculates in currency markets for clients and itself (not necessarily in that order); “front runs” (trades ahead of) its clients’ buy and sell orders through an arcane practice known as “high frequency trading”; makes exotic derivatives bets which taxpayers get to pay off when its counter-parties (think, AIG) blow up; and dabbles in global commodities markets — if by “dabbling” you mean making highly levered, multi-billion dollar wagers, ala MF Global (hmmm . . . . if MF Global lost billions, who made them??).

Oh!  And one more thing: Goldman Sachs shrewdly  reinvests hundreds of millions of its profits from aforesaid activities, and donates it to senior politicians from both parties, no doubt  . . . because Goldman Sachs is so patriotic!

Which brings me full circle:  if you want to express your disgust with Goldman Sachs, exactly how do you do it??

(If you say, “write your Congressman,” you’d better make sure there’s a big check attached).