First, a disclaimer:  the reason I picked up a newsstand copy of “The Real Housewives of the Twin Cities” — the July issue of Mpls – St. Paul 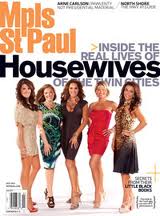 magazine — wasn’t to find out who the five women were, where they shop, or eavesdrop on any juicy gossip, titillating personal details, etc.

No, my interest was purely professional:

I wanted to know where they lived.

Home to not one, but two of the housewives.

In fact, the only housing details that came as (mild) surprises were:   one of the housewives hails from Eden Prairie (albeit the exclusive, “Bearpath” gated community); and the Edina neighborhood that’s represented isn’t Rolling Green, Country Club, White Oaks or some other multi-million dollar enclave, but the relatively affordable Morningside, just west of Linden Hills in Minneapolis (which just so happens to be one of my favorite Twin Cities neighborhoods).

As far as titillating personal details, it’s hard to do better than Jennifer Kline’s (too?) candid botox remarks:  ‘I’m all about injections.  I can’t imagine anyone over 40 on TV who isn’t’ (which I suppose qualifies her as an unreal Twin Cities housewife).