Tom Sawyer would be impressed by one of my favorite stagers.

Sawyer, of course, managed to get paid both by the homeowner whose fence he painted, and the boys who paid him for the privilege of actually painting it. 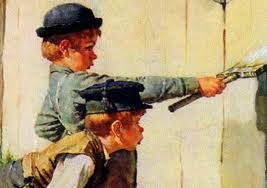 By contrast, depending on the project, my stager gets paid by one of four parties:  1) my client (the homeowner); 2) me, in my capacity as listing agent representing the homeowner; 3) students taking one of her staging workshops; and 4) people who buy her book on staging (which features examples of her work).

Before you draw the wrong conclusion, though, let me point out two key differences between my stager and Tom Sawyer.

1) Whereas Sawyer was merely a middleman, my stager is very “hands on” —  squarely involved in every aspect of the home she’s staging.

She also puts in untold hours, is an in-demand teacher (see below), and works magic with every house — and room — she touches.

2) She doesn’t actually double-bill for the same work.

So, next week, she’ll be conducting a staging workshop at an upcoming listing of mine in South Minneapolis.

Who’s paying for her time?

In this case, six students who are flying in from all over the country to take her 2-day training course.

Total cost to my client, for staging services easily worth $1,500 retail?