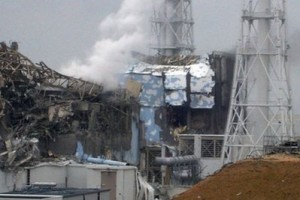 Usually when a nuclear reactor is first shut down, an electric pump pulls heated water from the vessel to a heat exchanger, and cool water from a river or ocean is brought in to draw off that heat.

But at the Japanese reactors, after losing electric power, that system could not be used. Instead the operators are dumping seawater into the vessel and letting it cool the fuel by boiling. But as it boils, pressure rises too high to pump in more water, so they have to vent the vessel to the atmosphere, and feed in more water, a procedure known as “feed and bleed.”

It’s hard not to escape the parallels the between the 2008 Financial Crash, and the unfolding nuclear disasters in Japan.

In both cases, the system(s) for dealing with a malfunction were compromised by the same events causing the malfunction.

So, in the U.S., we continue to pump in (“feed”) fresh capital into Wall Street, in myriad and sundry ways:   zero percent interest rates; government guaranties of too-big-to-fail financial institutions (now even bigger than pre-Crash); FDIC insurance of bank deposits, etc.

In fact, it’s fair to say that the support and subsidies being extended to Wall Street are sufficiently arcane that ordinary taxpayers really don’t have a clue — save for when they open their monthly statements and see what they’re (not) getting paid on their savings; fill up their gas tanks; or check out at the grocery store (yup, they’re all linked).

Call that the “bleed” part of “feed and bleed.”

Meanwhile, Japanese authorities are frantically pumping in seawater in a desperate attempt to cool off their damaged reactors.

Where the analogy breaks down is the cost of the rescue effort(s):  pumping in seawater — unlike creating trillions of dollars in new and borrowed money — doesn’t risk polluting (adulterating) all the remaining water in the ocean.