No, no one gushed that “you like me, you really, really like me” when they received an Edina Realty “Emmy” award this year (the company’s equivalent of the Oscar, named in honor of company founder Emma Rovick and awarded to one Realtor and one (salaried) employee annually). 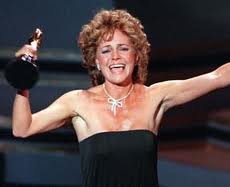 Instead, what I heard was that they really, really like  . . . their colleagues.

This year’s “employee” winner was the OA (Office Administrator) of the 50th & France office.

What appeared to be the majority of the 50th & France office, in the front of the convention hall.