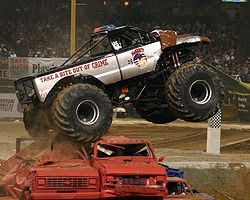 Anyone know what’s going on with/at the Metrodome?

Except for Vikings games every other Sunday in the Fall — plus the occasional “Monster Jam,” pictured above — my impression is that it’s idle.

I also seem to recall something about taxpayers forking out most of the cost, once upon a time (like, 1981).

Assuming that, due to the economy, redevelopment plans for the site are progressing slowly — if not completely on the back burner at the moment — how about getting some use out of what is still a very serviceable, if functionally obsolete, building?

Specifically, let high school baseball and football teams make use of it.

What the Metrodome lacks in luxury suites, it more than compensates for in raw, covered indoor space — space that’s at a premium in the Twin Cities during the winter months.

Meanwhile, there must be tens of thousands of Minnesota kids (mine’s one) who, somehow, just aren’t that into ice hockey, basketball, skiing and the like.

Instead of consigning them (and their parents) to long, winter evenings and weekends in basements playing wii, the Metrodome would seem to be a perfect venue.

I even have a name: ‘Grapefruit League North,’ a takeoff on baseball’s spring training league in Florida.

I have no idea what lights and security for the building cost, but, speaking only for my 10 year-old, as long as he doesn’t have to wear mittens, it’ll be just fine (and a lot warmer than whatever the temperature is outside!).

P.S.: The stadium’s original namesake, Hubert Humphrey, no doubt would have approved of such a plan. The now mostly dark stadium would also make a helluva part-time food shelter, which I hear have some overcrowding issues these days.

P.P.S.: Did I miss when the stadium was re-christened “Mall of America Metrodome,” apparently its new name?