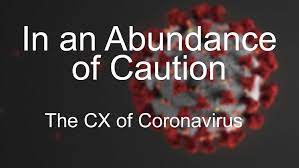 [Note to Readers: in the wake of the jarring news that President Trump and a growing number of his inner circle have been stricken with Covid-19, the phrase “out of an abundance of caution” is once again making the rounds (Example: “After attending a White House ceremony without a mask earlier this week, Congressman So-and-So is not currently experiencing any Covid-19 symptoms, but out of an abundance of caution is self-isolating at home for 14 days”).

The post below originally appeared January 1, 2018, in the aftermath of another national health scare — a food-borne e.coli outbreak — that now seems positively quaint by comparison.

As always, the views expressed here are solely those of Ross Kaplan, and do not represent Edina Realty, Berkshire Hathaway (“Berkshire”), or any other entity referenced. Edina Realty is a subsidiary of Berkshire.]

Once upon a time, the likes of William Safire and George Carlin could be counted on to call out linguistic curiosities.

In that spirit, I offer up the very confused expression, “Out of an abundance of caution.”

Practically dripping with CYA (“Cover-Your-A**”), it’s almost always invoked by a contrite person or company that knows they’re doing (or did) something wrong, and is trying to limit the fallout, legal and otherwise.

Example: the spokesperson who says that, while the food producer believes they located the source of the e.coli outbreak, out of an abundance of caution they were nonetheless extending the lettuce recall nationally.

So, what’s better than practicing an “abundance of caution,” after-the-fact?

Behaving with a “paucity of recklessness” beforehand . . .