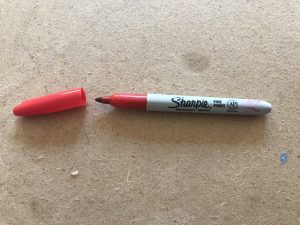 I’m starting to think the manufacturer of Sharpie pens (my favored writing instrument, along with a blue ink, .50 micron Uni-ball pen) has stumbled upon an especially clever — and diabolical — way to sell more pens: design a too-loose pen cap.

When it invariably falls off, the pen dries up — and users have to grumblingly toss it, and grab another.

I certainly prefer that explanation to the alternative: yours truly is becoming more absent-minded, and leaving a trail of uncapped Sharpies behind me everywhere I go, then concocting paranoid theories to explain things . . . 🙂

P.S.: Speaking of theories . . . I’ve devised a way to ensure that my now very independent 16 year-old son interacts with me more regularly: swap out the 13 gallon(?) gas tank on our family’s well-traveled Honda Element (and said son’s regular wheels) for a much smaller tank.

That way, he needs to re-fill it more frequently . . . which means he needs to track me down to get my credit card (he was startled to learn that, in a pinch, you can pay for gas with cash at a convenience store rather than Costco).