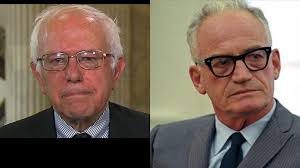 I was just thinking Sanders is more of a latter-day Barry Goldwater.

“Like Reagan following his attempt to primary Gerald Ford in 1976, Sanders is coming off a near-miss insurgent campaign against an embodiment of the party establishment, who then went to an excruciatingly narrow general election defeat.

Like Reagan, Sanders is widely judged too old to be elected president; he is older than the Gipper, but just as Reagan’s age in 1980, 69, roughly matched American life expectancy at the time, so does Sanders’s age of 77 match life expectancy today.

Like Reagan, Sanders is widely considered too extreme to be nominated, and certainly too extreme to win: Some Democrats fear that his nomination would give oxygen to a third-party centrist (with Howard Schultz ready for that role) as Reagan’s prompted John Anderson to run as a liberal Republican; some Republicans hope that a Sanders-led ticket would help the unpopular incumbent sneak to re-election.

And like Reagan, Sanders comes by his supposed extremism honestly, having been ideologically left-wing for his entire public life, preaching socialism in the midst of the Reagan and Clinton eras just as Reagan made himself a spokesman for the Goldwaterite right in 1964, at its moment of epic political defeat.”

At least to me, all that misses the boat; Sander’s truer political forebear is Arizona Senator Barry Goldwater.

Scarcely 16 years later, however, Goldwater’s seemingly right-wing brand of conservatism became the de facto Republican platform, embraced by Ronald Reagan and virtually all of his successors.

Call it, “losing the [political] battle, but winning the war.”

Arguably, Sanders is playing the same role on the left, just speeded-up: it only took 4 years for the Democrats to embrace his “radical”-sounding 2016 agenda as party gospel.

That includes such issues as Medicare for All; free public college; beefed-up environmental safety and protection; a higher minimum wage; and more progressive (vs. corporate-friendly) tax policy.

Meanwhile, personality-wise, it’s no contest: the dyspeptic Sanders evokes Goldwater’s rough edges and crustiness (if not crankiness) much more than he does Reagan’s sunniness.

Culturally, let me put it this way: I don’t think they went to the same synagogue growing up (though WASPy Goldwater actually had a Jewish grandparent). 🙂

Another key difference is that Goldwater retreated to the Presidential sidelines, eclipsed by that Republican darling waiting in the wings: then-California Governor Ronald Reagan.

By contrast, the up-and-coming Presidential hopeful in today’s Democratic Party is . . . Joe Biden (?!?),

Of course, 2020 Democrats can still opt for the original: Bernie himself.

Which raises one more caveat about the Bernie – Goldwater analogy: it’s premature.

If instead of ousting Trump next year, Sanders (or one his political heirs) leads Democrats to a resounding electoral defeat, he risks comparison with another rejected liberal of yore: George McGovern.