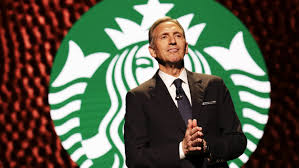 Is That Democrats’ Sense of Patriotism Talking? Or Their Self-Interest?

[Editor’s Note: The views expressed here are solely those of Ross Kaplan, and do not represent Edina Realty, Berkshire Hathaway (“Berkshire”), or any other entity referenced. Edina Realty is a subsidiary of Berkshire.]

Since Starbucks’ Howard Schultz announced on 60 Minutes last Sunday that he may run for President, there’s been a resounding chorus from Democratic quarters: a collective, VERY emphatic, “Don’t do it, Howard!!” 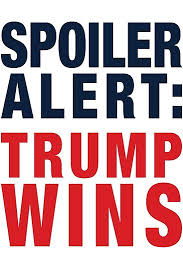 “Do it!”, or perhaps more accurately, “I DARE you to do it!,” issued by President Donald Trump (Trump taunted on Twitter that Schultz “didn’t have the guts to run”).

The problem for the American electorate is that it’s hard to distinguish between Democrats’ sense of patriotism — specifically, their heartfelt concern that another Trump term would be disastrous for the country — and Democrats’ rather more parochial fear that a centrist, third-party candidate will split the anti-Trump vote, causing the Democratic nominee to lose in 2020.

Fortunately, if Democrats are serious about depriving Trump of a second term, there’s a way they can increase the odds of that outcome without discouraging qualified, 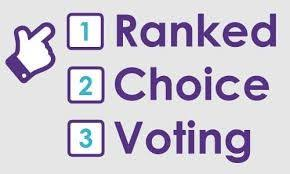 third-party candidates: come out strongly in favor of something called “Instant Run-Off Voting” (also referred to as “Ranked Choice Voting”).

If they’re smart and have a sense of history — two very big “If’s,” I know — Republicans will embrace the idea as well.

That’s because, in two of the three Presidential elections where third-party candidates loomed largest, the nominee whose prospects were “spoiled” . . . was the Republican.

Teddy Roosevelt vs. Taft vs. Wilson

So, in 1912, a majority of the electorate — almost 51% — expressed a preference for a Republican President.

However, because that vote was split between Teddy Roosevelt (27.4%) and incumbent President Howard Taft (23.2%), Democratic nominee Woodrow Wilson slipped into office with only a plurality of the votes cast, 41.8% (note: Socialist Eugene Debs got 6%).

With neither Bill Clinton (43%) nor President George H. Bush (37.4%) collecting a majority, according to the rules of Instant Run-Off 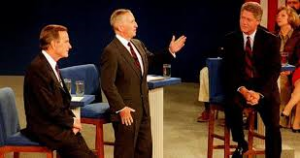 Voting, third-place Perot would have been eliminated from the ballot, and his 18.9% redistributed according to his voters’ 2nd choice.

Only in 2000 would Instant Run-Off Voting have hurt the Republican candidate.

Then, when Albert Gore and George W. Bush deadlocked 48% – 48%, it’s likely that Ralph Nader’s 4% would have swung disproportionately to Gore, resulting in his election. 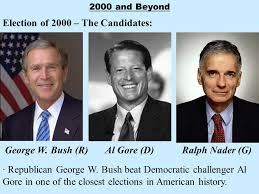 At least to an independent like me, stifling reform that would allow third-party candidates, then decrying the “spoiler effect” in November, has more than a whiff of chutzpah to it (Yiddish for “shameless audacity”).

The classic definition of chutzpah, of course, is “killing your parents, then throwing yourself on the mercy of the court because you’re an orphan.”

Is it realistic to expect Democrats and Republicans to support Instant Run-Off voting in Presidential elections any time soon?

Assuming neither party does — at least not at the same time — the electorate should take the decision away from them. 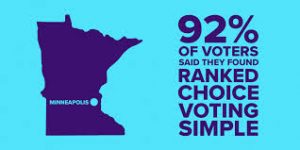 That can happen either by enacting Instant Run-Off Voting by referendum at the state level, or federally, through a Constitutional Amendment (requiring ratification by the states).

Empty Warnings; “The More, the Merrier”

Lost in all the Schultz-bashing the last few days is that many jurisdictions nationally have successfully used Ranked Choice Voting for years: both St. Paul and Minneapolis have elected several mayors that way.

So have voters in San Francisco, Oakland, Santa Fe, and Berkeley.

Contrary to warnings from establishment partisans, there have been no dire consequences, and some unexpectedly pleasant ones.

For example, Ranked Choice Voting results in more civil, inclusive campaigns, because suddenly candidates in a crowded field need to appeal to voters as their potential runner-up choice.