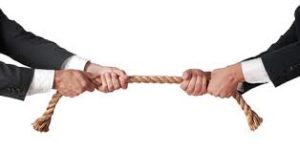 Negotiate Formally or Informally? It Depends

[Editor’s Note:  The views expressed here are solely those of Ross Kaplan, and do not represent Edina Realty, Berkshire Hathaway, or any other entity referenced.  If you need legal advice, please consult an attorney.]

But it’s a fascinating subject.

While everyone knows (or should) that there’s no such thing as a verbal contract to sell real estate, negotiations often are conducted verbally, then committed to writing only if/when the terms solidify.

There are certainly situations where that’s appropriate, but in general I prefer a written trail, for two reasons, one tactical, one more technical/legal.**

A verbally accepted (counter)offer, technically, is meaningless; until it’s agreed to in writing, it’s unenforceable.

A good negotiation is an efficient one, that’s binding on all parties.

The second, more technical reason is that the legal status of the negotiation is clearer when counter-offers are done in writing.

That’s because in contract law, to counter an offer is to kill it.

It can always be revived, but only if both parties agree.

By contrast, when the Buyer and Seller negotiate verbally, there’s usually a “live” offer or counter-offer on the table.

If negotiations break off or otherwise reach an impasse, there’s always the possibility that one party or the other could retreat to an earlier position, sign the document, and announce to their (surprised) opposite that they now have a consummated deal.

That’s true even if a couple of days (weeks) have elapsed, and the other party has entered into a written contract with someone else!

To avoid that prospect, it’s important for the Buyer or Seller to (at some point) formally withdraw the last proposal on the table — something that I’m sure not every Realtor out there knows or remembers to do.

P.S.:  What’s the one, big advantage of skipping formal counter-offer’s?

**So, is an email considered a written response?

Which is why, to be safe, I’d use a signed Counter Offer delivered to the other party, and — assuming it was delivered electronically — print out a time stamp showing when it was sent, and also ask the other agent to acknowledge receipt.