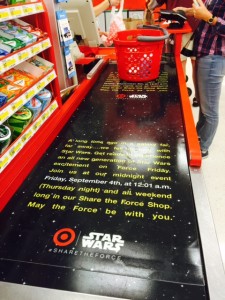 In a world where there are now ads over men’s urinals (at many restaurants, movie theatres, etc.), you wouldn’t think that there’d be any new frontiers for new advertising venues.**

At least Target’s new advertising medium has the virtue of being clever:  as shoppers unload their to-be-purchased items on the conveyor belt at checkout, they see a scrolling ad for an upcoming Star Wars promotion. 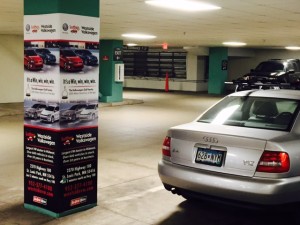 At the other extreme:  the ads now adorning the pillars in the underground parking garage in St. Louis Park’s West End shopping district.

I hope the advertisers aren’t paying much for that exposure, because it ain’t very valuable (my 2¢).

P.S.:  in the “cheeky ad” vein, my favorite is the ubiquitous sign in front of tip jars in coffee shops, pizza parlors, etc.:  “If you fear change . . . leave it here.”

**Somewhat curiously, there are no ads — yet — on the back of the doors in bathroom stalls.  I suppose that that would truly qualify as “cheeky” advertising (sorry).