“Turtles All the Way Down” (Also Known as “Infinite Regress”)

As a faithful agent, I’ll always do what my principal — the client — instructs me to do.

But, that doesn’t mean I necessarily endorse their chosen strategy.

Two cases in point:  1) so-called “asterisk clause” offers, in which a Buyer in multiple offers promises to top the highest bid by a prescribed amount; and 2) Contingent offers, wherein the Buyer has to first sell their current home — what Realtors refer to as “the backup house” — to consummate the purchase of the next one.

The hitch with each situation is that no one is absolutely committing to a deal, with the consequent effect (often times) that such deals have a high failure rate.

The risk with an asterisk clause offer — or at least one of them — is that everyone comes in with such an offer.

So, one Buyer offers $10k over the highest offer; another offers $15k; and another $20k — but no one fills in an offer amount!

Exactly where does that leave the Seller?

Answer:  in the position of telling all bidders to come back to the table with a firm number.

Of course, there are many other reasons not to like asterisk clauses, including the fact that they implicate the listing agent in revealing one Buyer’s offer to another (contrary to the usual rules — and the opposite of a “level playing field” approach to conducting multiple offers); and that the winning bidder has a funny way of backing off the price they committed to, once the other bidders have disappeared and the competition for the home has cooled off. 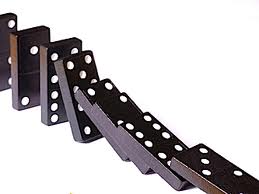 So, assume that a Contingent Offeror finds a willing Seller, and inks a deal with them.

The Contingent Buyer shifts their focus to selling their current home.

Suffice to say, the more links in the chain, the more tenuous the deals — all of them (I seem to recall something about chains and weak links).

Perhaps that’s why, at least in my experience, the more usual outcome with Contingent deals is that either the backup home (or homes!) fail to sell in time, causing the deal to expire (and the chain to unravel); or, another, stronger Buyer shows up, and bounces the Contingent Buyer and their earlier, signed Purchase Agreement.