Waiting For Wall Street to “Pull an OJ”

With that one, withering rebuke, Joseph Welch spelled the beginning of the end of Joseph McCarthy’s bullying, reputation-destroying witch hunt for Communists he claimed had secretly infiltrated all walks of American life following World War II.

Clearly, it hasn’t happened yet.

Despite now-irrefutable evidence (and lots of it) that Wall Street corruption was at the heart of The Crash of 2008, very little has changed.

Mountains of Wall Street cash continue to finance elections; government regulators still kowtow to Wall Street (Why not? That’s who’s going to employ them after they leave government); and Wall Street lobbyists have thwarted any and all efforts at real reform (sorry, “Dodd-Frank” was an embarrassment at inception, and has been gutted since).

What will it take?

My guess (hope?) is that, eventually, the public will reach a tipping point, the same way the public’s attitude towards Joseph McCarthy shifted.

Unabated Wall Street arrogance and greed will finally precipitate a (belated) response . . . and things will change.

If you want a precedent, consider now-incarcerated OJ Simpson.

If he’d become a law-abiding citizen after being acquitted for murder . . . he’d likely still be free today.

Instead, he continued to behave arrogantly and recklessly, and is now serving a 33 year sentence for armed robbery.

Given Wall Street’s unchecked pattern of corruption, it’s a given that they will continue to break (and bend, and improperly influence) the law.

The only questions are, “what future crime will be the breaking point?,” and, “who will be this generation’s Joseph Welch?”

Unlike earlier instances of widespread financial fraud — the S&L bust two decades ago comes to mind — the U.S. Justice Department has been conspicuously silent this time.

“Wall Street may be guilty of greed, bad judgment, and even stupidity, but that’s not the same thing as breaking the law.

Plus, prosecuting financial crimes is complicated and expensive.”

No doubt — but then so is cleaning up after a Wall Street-precipitated financial collapse (here’s a thought:  earmark .01% of the harm caused by Wall Street — or a measly $1 billion — to prosecute its wrongdoing).

The latest from Attorney General Eric Holder is that, yes, Wall Street may indeed have broken some laws, but to the extent that government succeeds in punishing the so-called Too Big to Fail (“TBTF”) banks, the broader economy may suffer as a result.

Too Big to Prosecute

If there’s a better argument that these firms are now so large that they pose an existential threat to the country — and therefore need to be shrunk, now — I don’t know what it is.

It’s also the case that the reason Wall Street can plausibly argue it hasn’t broken any laws is because . . . it wrote them!

Or, in the case of complex derivatives, prevented them from being written. 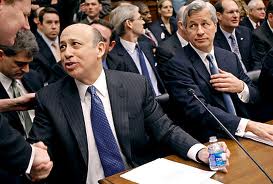 Even so, one need only peruse a financial headline or two, from practically any day of the week, to know that Wall Street in fact has flagrantly broken plenty of laws.

So, Mr. Holder, in case you need any help, it sure appears at least to this former attorney that (some) JPMorgan Chase officials committed perjury in their testimony to Congress regarding the so-called London Whale debacle.

And that the bank’s financial statements (fraudulently?) misrepresented the nature of those trades, in direct violation of Sarbanes-Oxley.

And that JPMorgan Chase obstructed justice by misleading its regulators, and withholding material information from them.

And that the bank’s senior management, in covering up all of the above, arguably violated federal “RICO” laws.

And that JPMorgan Chase and the other TBTF banks now plainly operate in violation of this nation’s Sherman and Clayton Anti-Trust Acts; engage in price-fixing and manipulation (Libor, for starters); regularly file misleading financial statements (more Sarbanes – Oxley violations); engage in securities fraud proscribed by the Securities Act of 1933 and Securities Exchange Act of 1934; breach their fiduciary duty to clients; engage in illegal “tying” and kickbacks in connection with their underwriting business (also an antitrust violation), etc., etc.

The real question is, do Mr. Holder and the Administration??