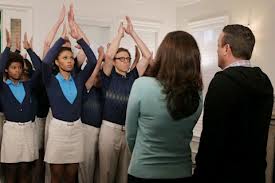 So goes one of the opening scenes in new sitcom “The Neighbors,” the latest in the “aliens-stranded-on-earth-who-befriend-humans” genre (most famous example:  ET).

In this case, it is an entire group of aliens who are stranded, not a solitary adolescent, and the location where they choose to bide their time is a new subdivision in suburban New Jersey 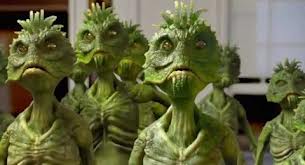 Aside from their odd tendency to synchronize all their behavior — and revert from their adopted human form to green lizards when threatened — the aliens turn out to be surprisingly good and even empathetic neighbors.

At least through the first two episodes (all I’ve seen) . . .

*When the first, non-alien neighbor moves in, the aliens all show up with cherry pies.

P.S.:  Although I’ve certainly had prospective Sellers tell me they suspected their neighbors were aliens, I’ve never seen that on a Seller’s Disclosure.   🙂