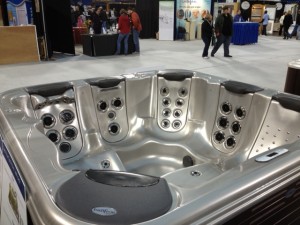 Besides the various window companies, remodelers, and deck builders you’d expect to be well-represented, I saw spas on the floor of the Metrodome yesterday.

Lots and lots of spas.

Except that these babies have as much in common with spas of yore as a fully loaded Range Rover does with a model T.

Spas the Size of Bedrooms

I’ve never seen the chassis for a UFO, but I imagine that that’s what one would look like.

While I’m not in the market for a spa, prevailing prices seemed to be anywhere from $5,000 to more than triple that — with sizable discounts available for floor models.

At least to me, though, the exhibit that made the 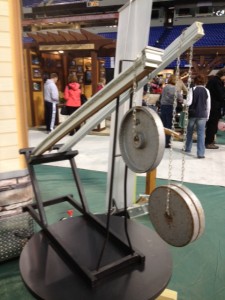 biggest impression took up vastly less space, and was easy to mistake for a piece of exercise equipment.

Hosted by Canadian window company Fibertec, it showed a 20 pound weight suspended from a section of vinyl window, and double that hanging from a fiberglass window.

The vinyl window was visibly bowing; the fiberglass window was perfectly straight.

Presumably, the same would be true for metal windows (specifically, aluminum).

P.S.:  One of the worst things a homeowner can do is replace high-quality but aging windows with cheap vinyl replacements.

Prospective Buyers won’t swap out the cheap windows for better ones; they’ll just pass on the house, because they think its integrity and character have been compromised (they have).