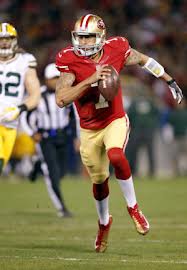 I’m no football guru, but watching Colin Kaepernick’s electrifying performance yesterday against the Green Bay Packers, it would appear the 49er’s now have an extra quarterback.

Apologies to any Christian Ponder fans, but the Vikings — or another NFL team — would do well to trade for Kaepernick’s backup, Alex Smith, during the off-season.