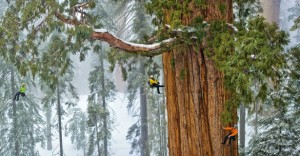 While it turns out that giant Sequoia’s don’t in fact keep growing vertically, they do keep growing horizontally.

That is, their trunks keep growing (also their branches and limbs).

How is it that nobody knew this before?

No one had actually bothered to measure them — admittedly, not an easy undertaking in the case of massive, millennia-old giants like “the President” and “the General,” not so coincidentally tucked away in some of the most remote areas of California’s Sierra Nevada mountains.

Among the striking discoveries made by scientists is that even the rate of growth of a big tree, not just its height or total volume, can increase during old age. An elderly monster like the President actually lays down more new wood per year than a robust young tree. It puts that wood around the trunk, which grows wider, and into the limbs and the branches, which grow thicker.

This finding contradicts a long-held premise in forest ecology”that wood production decreases during the old age of a tree. That premise, which has justified countless management decisions in favor of short-rotation forestry, may hold true for some kinds of trees in some places, but not for giant Sequoia (or other tall species, including coast redwoods). Scientists have disproved it by doing something that earlier forest ecologists didn’t: climbing the big trees”climbing all over them”and measuring them inch by inch.