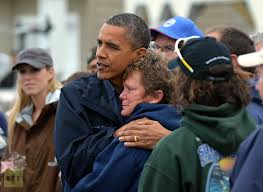 Every time the wire services publish a photo of President Obama comforting a victim of Hurricane Sandy, it’s hard to imagine jaded citizens (and potential voters) not being touched, at least a little bit (and no, I’m not attaching political motives to Obama’s humanitarian actions).

In fact, a broader principle seems to be at play.

Namely, if the political incumbents are seen to be on top of the situation, competent, compassionate, etc., it enhances their stature.

By contrast, if they appear to be incompetent, insensitive, or simply behind the curve . . . their stature is diminished.

Hurricane Katrina and President Bush in 2005 certainly seems to be an example of the latter.

Quite a bit further back — like 1979 — Chicago Mayor Michael Bilandic’s epic mishandling of a blizzard quite clearly cost him his job in the Democratic primary six weeks later.