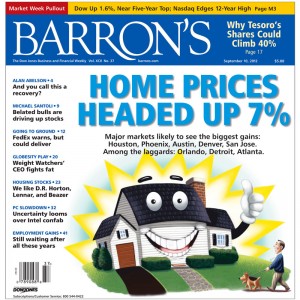 Jack of All Markets, Master of None?

In the case of the Barron’s piece, the answers are:

Sorry, after a decade in the housing industry, I’ve never heard of either of ’em.

2. That 7% is a blended forecast for all 317 U.S. metropolitan statistical areas.

Neat trick, that — I don’t know of anyone who can forecast a single market with any accuracy.

Even that overstates things, because a metro area like the Twin Cities actually consists of something like 100 discrete neighborhoods, each with their own attributes, inventory, and market dynamics.

If that’s true of a metro area with roughly 3 million people, imagine how meaningless blanket market predictions are for cities like New York, Los Angeles, or Chicago.

Umm . . . doesn’t that make the forecasted annual gain actually 2.33%? (undoubtedly the time frame most people would assume without reading to the end of the article).

P.S.:  Regular readers of this blog know that certain kinds of Twin Cities homes — for example, updated ones in move-in condition that appeal to first-time Buyers (below $250k or so locally) — are likely up 10% just in the last six months.